What a busy month we’ve had seeing more of our beloved Texas. We’ve written a great deal about the Lone Star State but there’s a whole lot of ground to cover in order to capture what is often referred to as Texas – It’s Like A Whole Other Country. If you travel east to west from Orange to Anthony, you’d have to drive 877 miles and north from Texline, in the Texas Panhandle, to Brownsville is 899 miles. To give you a bit of perspective, you could drive from Maine to North Carolina in about the same number of miles and go through six or seven states, depending on the route you chose. So, we’ve just touched the surface of the magnificence of this awesome state.

For six weeks, we stayed in the Rio Grande Valley (RGV) at a 55+ active adult community, the Llano Grande Resort and Country Club in Mercedes, Texas, where I did some work camping for the park in the way of writing and photography.

Llano Grande is by far the largest park we’ve visited with more than 1,100 sites. It was really more like living in a small town than being at an RV park. Almost everyone has a golf cart, or rents one, which is what we did, and residents can be seen driving around the neighborhoods, waving at everyone as they pass. We’re not big socializers but for those who are, this park has a lot to offer.

One of our favorite amenities were the dog parks – one for smaller dogs and the other a large park with a big pond. Our springer-mix, Sadie, loves to swim so she was in her element, chasing a ball and jumping in the water. Hannah, the border collie-mix, on the other hand, preferred to roam the large park and sniff every blade of grass and mark her territory while greeting other dogs with her signature whine. They made friends while they were there and seemed to look forward to our morning and afternoon visits.

While Dan was tooling around in the park’s incredible wood shop, I spent the days and evenings interviewing residents or taking photos of the park or the events, most of which were held at the Hynes Event Center, a new meeting facility located on the park grounds. I had the privilege to shoot a number of concerts but my favorites were the Oak Ridge Boys and 7 Bridges, an Eagles tribute band. While the bands were great, the Poker Run in golf carts was a blast to watch. Golf carts filled with couples searching for clues throughout the park reminded me of the movie Rat Race. Probably one of the most unique things we saw was on Tuesday mornings, the Weslaco Farmer’s Market brought their fresh, Valley produce directly to the park in a wagon developed for Winter Texans, or those who drive down from the northern states and Canada to live during the colder months of the year. When I was in high school and college, I worked on the family farm and took produce to the farmer’s market, so I appreciated the innovation of the Weslaco business in bringing the product to the masses.

As a photographer, I have to admit the events and activities were a joy to shoot, but my favorite thing to do was enjoy the nature offered in the RGV. Wild parrots could be seen, and heard, by the office almost every morning. Dan, however, preferred to watch the alligators at the Estero Llano Grande State Park adjacent to the resort. His dream is to go gator hunting and catch one without losing an appendage. Good luck with that.

While we knew about the culinary scene in the Valley, especially for Mexican cuisine, which was fabulous, we found some wonderful restaurants offering a variety of other favorites of ours. The Fireman’s Breakfast at Joses Cafecito in Weslaco stuck to your ribs and kept you full throughout the day. We visited Smoking Oak Barbeque in Mercedes twice during our stay. I wouldn’t call us BBQ snobs, but having lived in the Austin area for a number of years, we are pretty picky about our smoked meats. These guys have it down and their service was above and beyond. Cortino’s Italian in Weslaco was our final culinary stop in our six-week stay. All I can say is yum!

Now we’re set up in Niederwald, Texas, at Longhorn RV Resort for a few weeks. The park is just south of Austin and we love it so far. The sites are large with plenty of room for our big rig. They have nice facilities including a wonderful on-site store with just about everything an RVer needs, including the ability to purchase pizza and wings.

Our favorite place so far is the wonderful pond at the park. The sunsets over the water have been pretty spectacular and we’ve enjoyed early morning coffee on the large deck overlooking the water. We’ve even had a couple of ducks show up at our site, obviously looking for handouts, but the dogs aren’t fans so we let the neighbors feed them instead. Longhorn cattle can be seen in the afternoons near the dog park. It wouldn’t be Texas without them.

We did have a scare last week when the area was under a tornado warning due to passing storms. We decided to head to a town nearby rather than stay in the RV. One of the smaller travel trailers was overturned during the storms but, fortunately, no one was hurt. Our RV was fine but we were out of power for a couple of hours. If there’s one thing we’ve learned about storms, staying in an RV during high winds is probably not the best idea.

Now that we’re in cedar country, we’re ready to explore this gorgeous area of Texas. While we’re doing our thing, I invite you to enjoy this view of the Penny Backer Bridge or the Austin 360 Bridge that I captured a couple of years ago when we were living in the area. Safe travels!

If you are interested in the RV lifestyle or what it is like to RV full time without the commitment of an RV purchase, try an RV Rental. 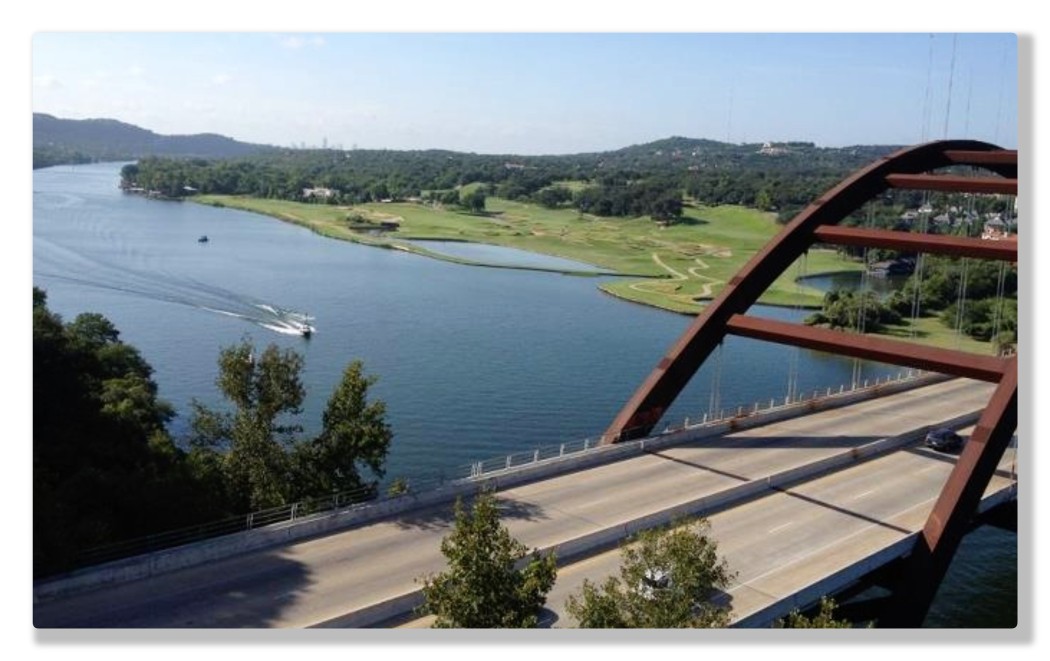