Normally when I blog, it’s about our time at an RV park, dining at a restaurant, sunsets and sunrises, and visiting attractions. While today’s blog is about an attraction, it’s also about history, a history most people around the world are not familiar with but should be. It’s about tragedy and how to find anything positive that comes from it. And it’s about a man who has lived a very long life and has never forgotten the role he played so many years ago and how it forever affected his life.

Today, I was blessed to meet and visit with Mr. Marvin Dees. The two of us along with my aunt and cousin visited for about an hour at the London Museum, Café & Soda Fountain. I learned a great deal about this humble individual and here are just a few things. 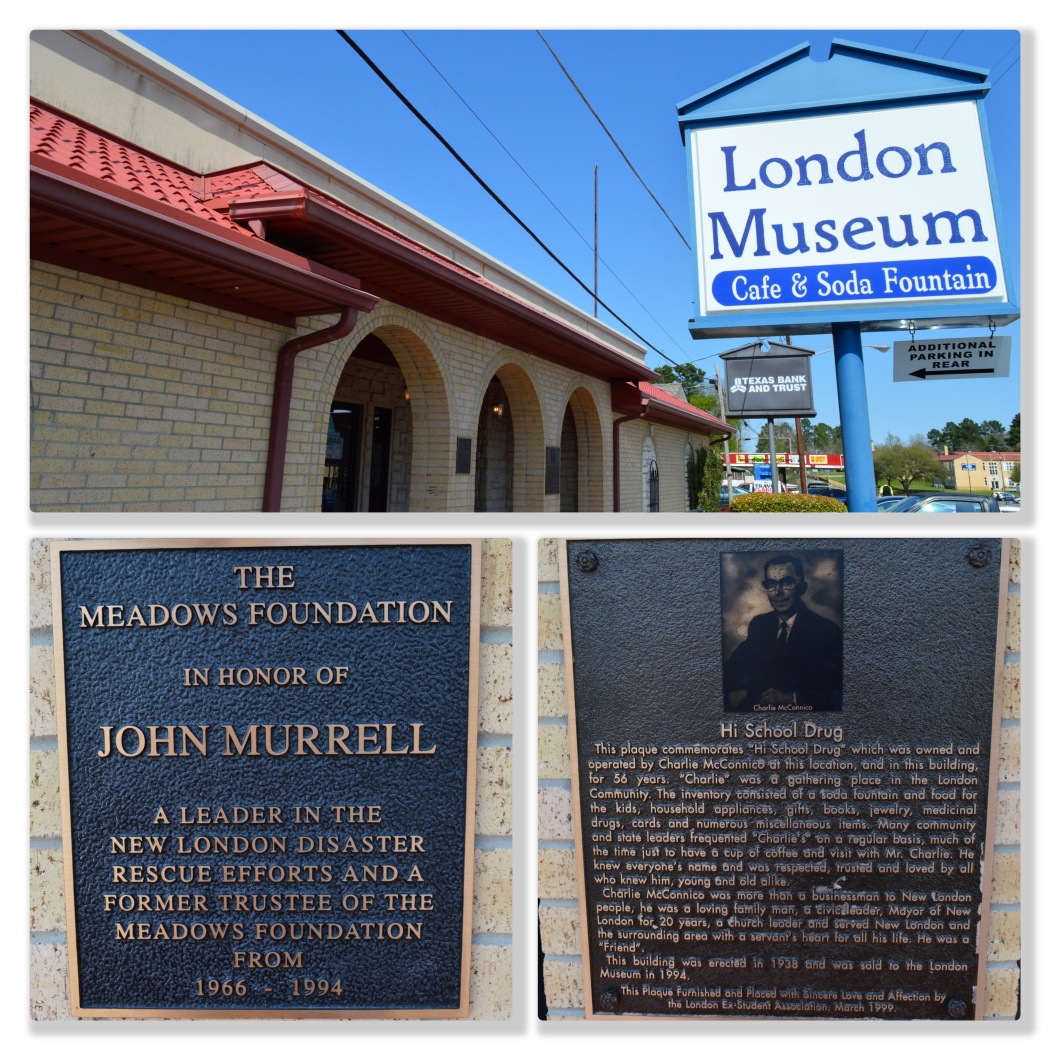 Mr. Dees will be 102 in November of this year and he still drives himself at his home in Tyler, Texas. On December 24, 1942, he received his draft letter and served in the Air Force during World War II, where he serviced C-54’s in California. He was happily married to his late wife for 70 years, until her passing when he was in his early 90’s. He graduated from Tulane University in Louisiana. While all of these are interesting facts about Mr. Dees, the following story he shared had a greater impact on me than any of the above.

On March 18, 1937, Marvin Dees along with four other crew members were working on the Pinkston oil lease in the east Texas community of Turnertown, which at the time had a population of around 1,500 people. Mr. Dees stated that by 1937 there were thousands of oil wells in the area, with a well placed around every five acres. The men were wrapping up their work day and putting away their tools when they heard a loud boom. Because they worked in the oil field, they thought a boiler had blown up at one of the many fields in the area. It wasn’t until a Texaco employee drove up to their site and told them there was an explosion at the New London School, five miles north of them, that they learned what the ground-shaking sound was. They didn’t learn until 45 minutes later when they pulled up to the relatively new school building what the impact was of the explosion. In 1937, the London School District was considered to be the richest school district in the state of Texas.

Huge piles of rubble were everywhere with one corner of the school still somewhat intact. After the initial shock of seeing what happened to the building that housed 5th  through 11th graders, plus post-graduates, the crew looked further and the tragic impact of the blast was revealed. 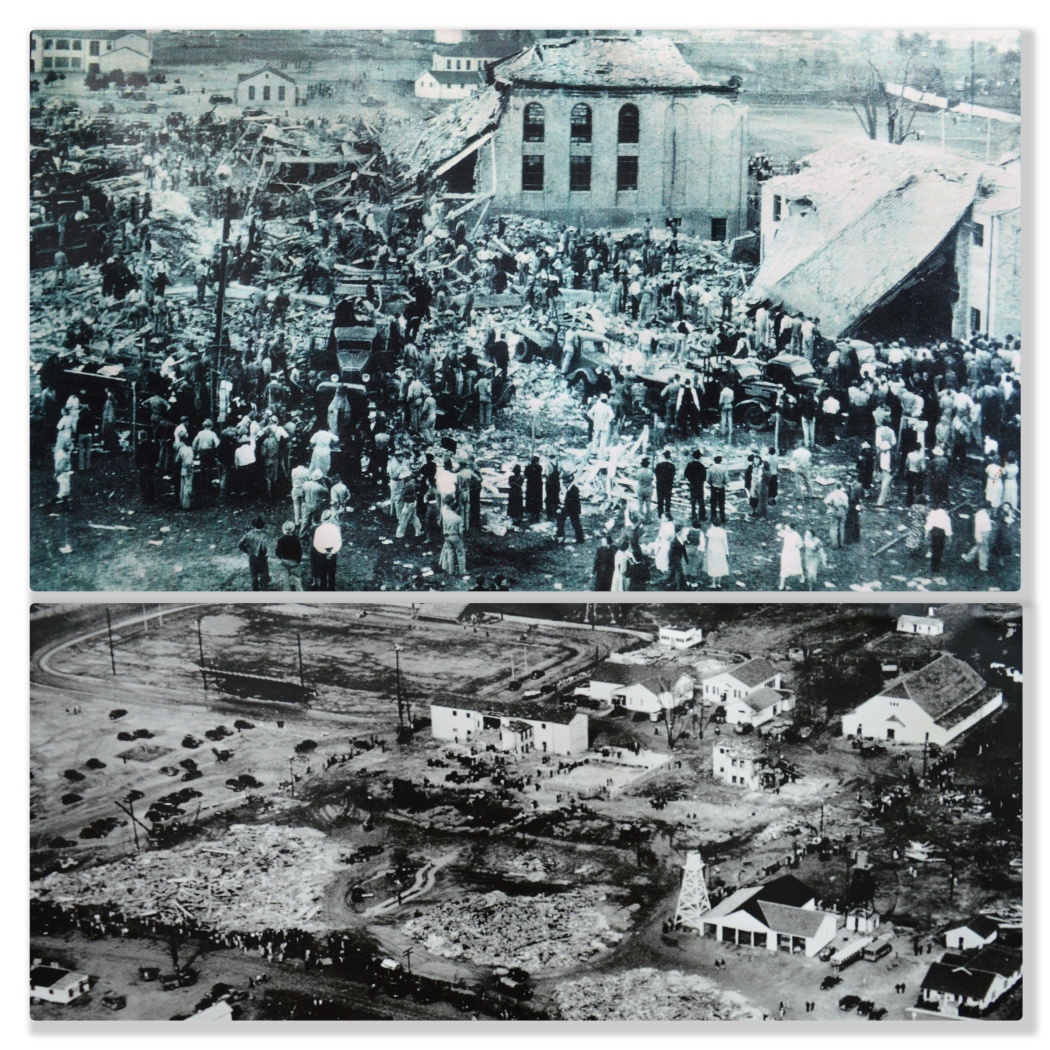 According to Mr. Dees, “Bodies were laid out around the perimeter. We couldn’t believe what we were seeing.”

Oilfield trucks and other workers arrived from all directions to assist in the recovery. Mr. Dees, who was only 21 years old at the time, along with others arriving on the scene began picking up debris in order to help find any survivors. Because of the enormous amount of concrete, workers used some of the oil trucks with wenches in order to move the heavy debris from the scene. As they were working, someone noticed a truck load of empty peach baskets. Many peach trees grew in the region at the time. A man suggested they form assembly lines and pass baskets full of debris from man to man in order to make the process quicker. These volunteers later became known as the Peach Basket Brigade.

“It took all night, “said Mr. Dees. “Pieces of bodies were picked up. Some were rescued, others passed on. It was heartbreaking to hear parents crying, going from body to body to see if they could identify their child. They took the wounded to churches in bread trucks, pickups, whatever they could. The Governor declared a state of emergency and called in the National Guard. They added flood lights so we could work all night. We inspected every place a body could be. At around 1 or 2am, it started raining, which made it worse. We worked in a daze. By 10:30am, all of the debris had been removed. As a 21-year old, I did a lot of growing up that day. It’s like it just happened yesterday and it’s been almost 80 years.”

At the time of the explosion, the Parent Teachers Association (PTA) was meeting at the school. During the search, a mother approached one of the searchers, according to Mr. Dees. The mother asked, “Have you seen my child? Did she die peacefully?” The man responded, “Yes, she died peacefully.” After the mother walked away, the man said “God forgive me. I lied to that woman. Her child died horribly.” It is estimated that 300 souls lost their lives because of the explosion. 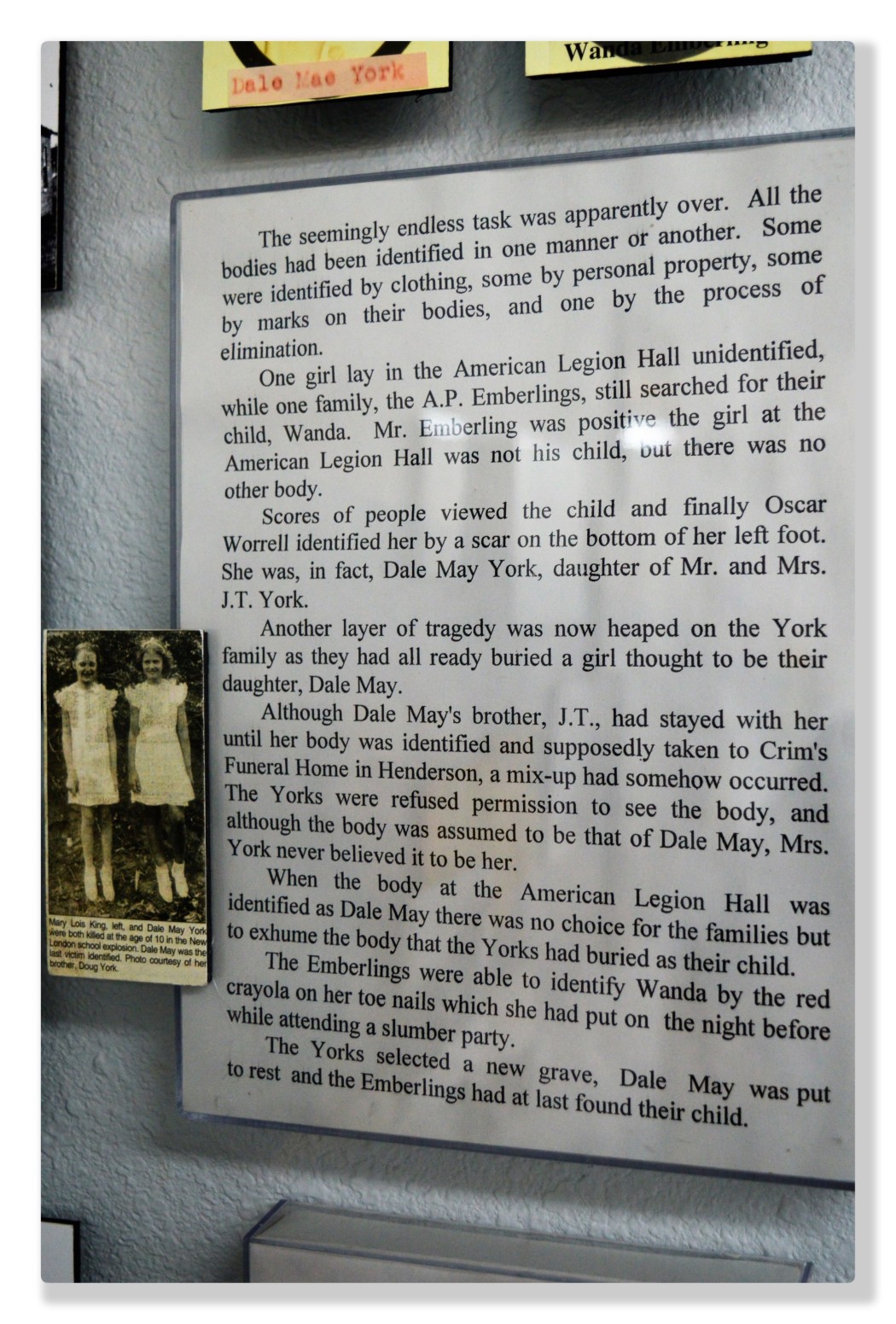 When I asked him if he attended any of the funerals, he told me he had not. A few weeks after the explosion, Mr. Dees was transferred to Arkansas for work so he didn’t know the details of the aftermath until he returned years later to the London Museum. He has been coming to the Museum and Café for lunch every Wednesday since he retired in 1979. According to museum staff, he is the last surviving rescue worker and there are only 2 or 3  survivors from the explosion.

An investigation was launched afterwards and it was learned that to save money, school officials decided to tap into an oilfield gas line to get free gas rather than pay for it, a common practice with businesses and homeowners at the time. Stress leaks developed in the pipe couplings below the floor. The high school was filled with the odorless gas. A spark from a sander that was turned on by a shop teacher in the woodshop ignited the gas, causing the explosion.

While visiting with Mr. Dees, he shared the secret to his long life was trying to find the good in everything, even tragedies. He said because of the New London explosion, millions of lives have been saved. Because of the accident, legislation was passed, first by the state government and later by the federal government, requiring a chemical be mixed into natural gas, giving it an odor.

After the tragedy was reported, including by a new reporter named Walter Cronkite, letters started pouring in from around the world. One particular letter stood out to me. In 1937 when German Reichs Chancellor Adolph Hitler shared his sympathies regarding the loss of the young lives, no one knew that this same ‘sympathetic’ leader would be responsible for the death of 1.5 million Jewish children, as well as millions of adults, less than a decade later.

I highly recommend you take the time to visit the museum in New London. Located across the street from a beautiful memorial as well as the present West Rusk County Consolidated Independent School District, the exhibits are well done. It’s important that this story not be lost, not only for the memories of the victims, but also because of the impact it had on resolving an issue no one recognized until after the tragedy. 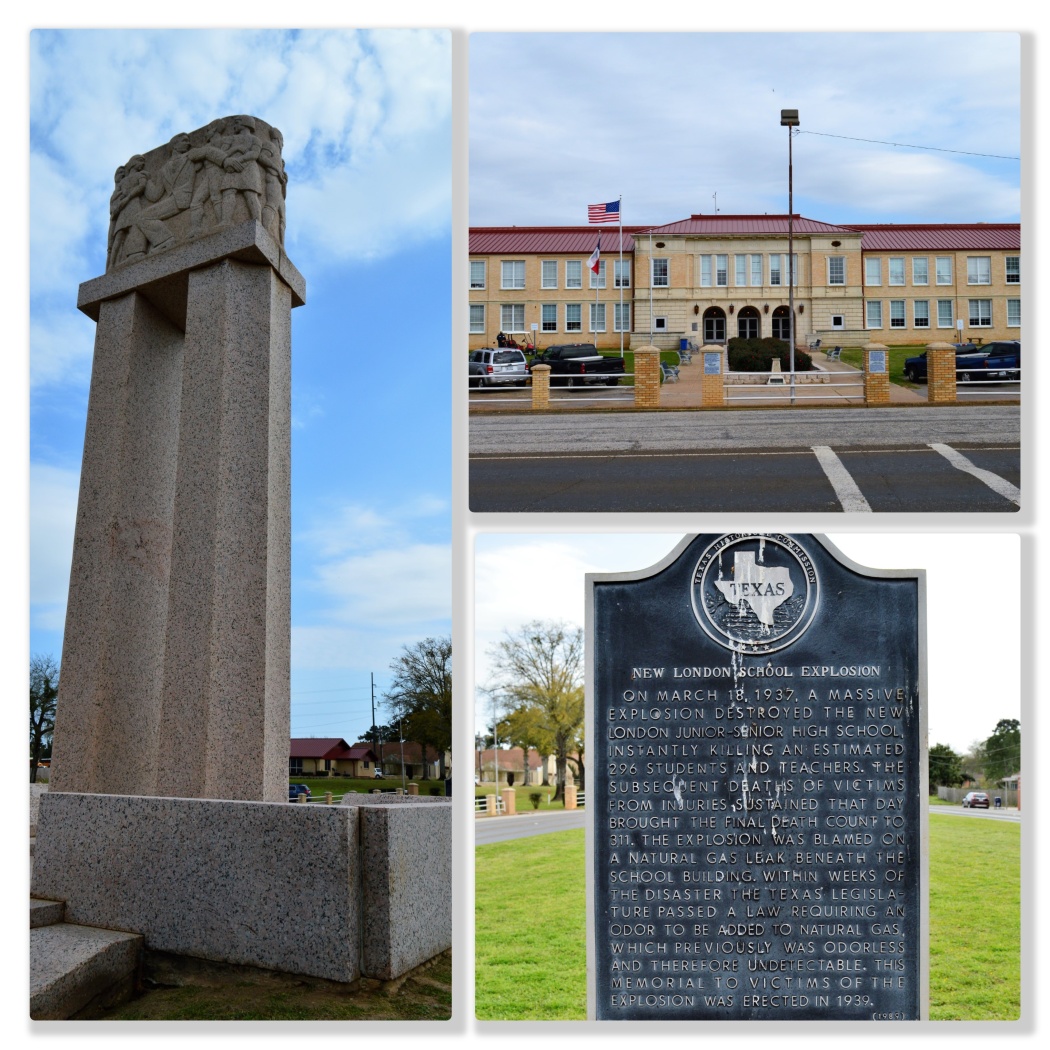 After saying our goodbyes to Mr. Dees, we traveled down the road to the Pleasant Hill Cemetery to pay our respects to more than a hundred of the victims of the tragedy. I have other family buried at the cemetery and was familiar with it. I’d seen a few of the gravesites while walking to see my family, but I’d never really searched out the graves of those who were lost in the explosion. I captured a few photos to share with you, as I do believe it is important to understand the impact. These photos are not meant to disrespect the families. As a parent, I could not imagine the pain the parents suffered, some losing as many as three of their children. 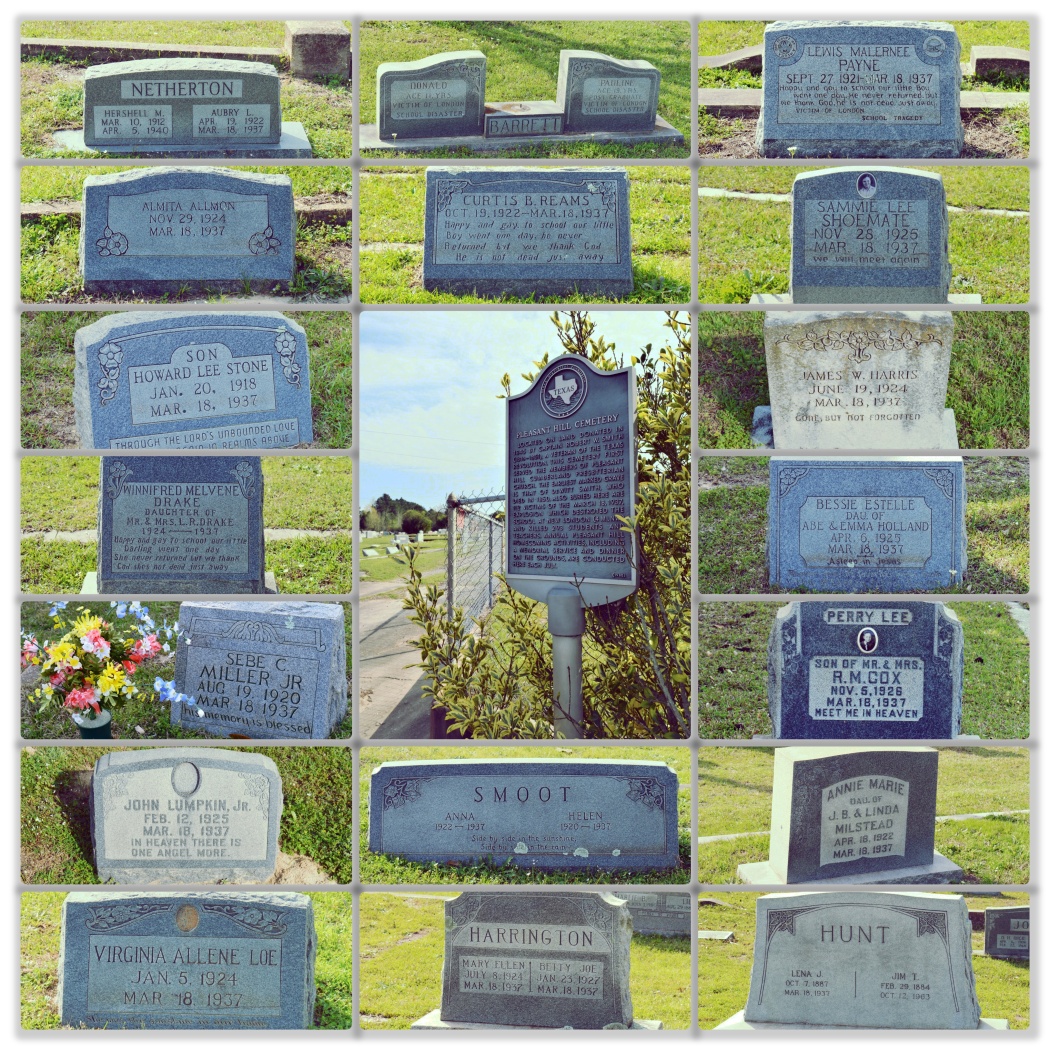 The 80th anniversary of the explosion is Saturday, March 18, 2017. If you so choose, take a moment of silence to remember the victims of one of the deadliest disasters in Texas history. Not everything you see is beautiful when you visit a community, but that doesn’t mean you shouldn’t stop to learn about it.

If you are interested in the RV lifestyle or what it is like to RV full time without the commitment of an RV purchase, try an RV Rental.
bloggereast texasexplosiongashistorymuseumnew londonrvTexastragedytravel

Pics from the Road